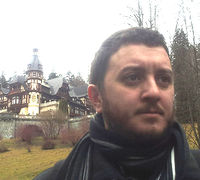 Toni Hermoso Pulido is a bioinformatician specialised in biological databases and webservices.

He earned a degree in Biochemistry at UAB in 2002. From 2002 to 2007 he was a scholarship holder in IBB-UAB, working in biological databases, protein bioinformatics and protein structure modelling, contributing with these approaches into different research lines. From 2007 to 2009 he worked as programmer and web developer freelance.

In 2009 he joined CRG, firstly helping to provide a new web portal to Bioinformatics and Genomics programme, and a few months later joining as member of the newly established Bioinformatics Core Facility. Since the creation of the unit he has contributed to the maturation of the facility and provided database and web-based services to the internal and external scientific community.

In 2015 he earned his PhD in Biotechnology at UAB on a thesis about the application of biological web databases for protein classification.

Work in the unit